Background on DNA for Family Research

Autosomal DNA (atDNA) will answer most genealogy questions. Therefore, start by testing atDNA. atDNA can be used to determine who your relatives are, who your birth parents are (when they are unknown), who’s behind your brick wall, and whether your mother’s family really came from Russia (or wherever family legend says she originated). Importantly, atDNA testing can be used to find cousins who are genealogists. Often, connecting with cousins will help to answer these types of questions.

atDNA tests provide very useful information on our families. atDNA tests include two types of results: ethnicity estimates and a match list that includes all of the people in a DNA testing company’s database. Matches are arranged with matches sharing the most DNA at the top of the list, and matches sharing the least amount of DNA at the bottom. Some people who have tested may have tens of thousands of matches; others have only hundreds or fewer. How many matches you have depends on who is in the database. Today, the majority of testers are from the United States. And although the United States is a melting pot, there are many more people with English ancestry than there are people of Ukrainian ancestry, for example.

When your atDNA is tested, it is tested at about 700,000 locations for single nucleotide polymorphism (SNPs). A SNP is a specific location that is polymorphic, that is, variable. For example, at one SNP, part of the population has an A in their DNA, whereas the other part has a G. These letters, A and G, along with C and T, are abbreviations for the chemical pieces that make up DNA. These pieces are referred to as bases of DNA. DNA is composed of strings of bases. It is also double stranded. The term basepair (BP) refers to double-stranded DNA.

The human genome has roughly three billion basepairs (BPs). When all three billion BPs are examined, humans are remarkably similar at 99.5% similar as noted by Wade Nicholas in his New York Times article, “In the Genome Race, the Sequel Is Personal.”

SNPs are used to test autosomal DNA, Y-DNA, and mtDNA. Y-DNA is also tested using another tool, called Short Tandem Repeats (STRs). An STR is a small segment of DNA, such as a 3-BP segment of ATG, that is repeated, e.g., ATG-ATG-ATG-ATG. People have different number of repeats at a given place in human DNA. For example, one person might have 10 repeats, whereas another has 11. These distinctions are examined when a 37 or 111-marker Y-DNA test is ordered from Family Tree DNA. A Y-DNA haplotype (as opposed to haplogroup) is assigned based on these results.

atDNA recombines, that is, it is shuffled, when eggs and sperm are made. This is why we are not clones of our siblings (unless you are an identical twin). A video explaining this is here.

Recombination leads to a loss of some ancestors’ DNA in our “genetic family tree.” This is why more distant cousins do not always match us—even when they test at the same DNA testing companies. This lack of matching can start even at the 3rd Cousin level. For more information, see this table.

This background information should get you started on your DNA journey–or provide a refresher for some of you. 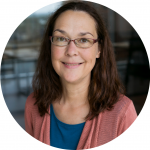 Get Your DNA Roadmap!